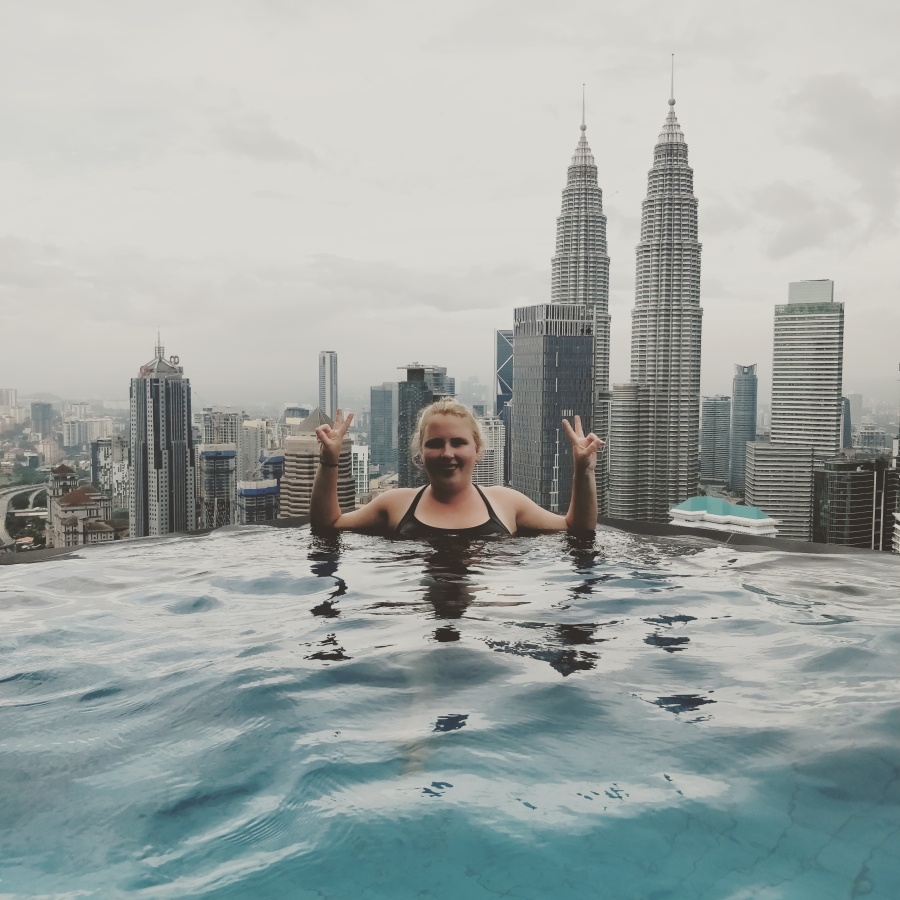 During my six week stay in Malaysia, I ended up in Kuala Lumpur (KL) three times. Each time I saw a different side to KL and fell in love with the multicultural, non-stop, vibrant city.

The first time we arrived in the city, we’d hired a car from Johor Bahru to KL after our trip to Singapore. Driving into the city was perfectly safe, but the cost of the car and the tolls made it a lot more expensive than taking the bus from Singapore.

We also flew in from Langkawi and Sandakan. Because there was always at least two of us, getting a Grab taxi to/from the airport was a lot cheaper than getting public transport. However, if you’re travelling solo, public transport is the best way to go.

I recommend downloading Grab and using it around KL, it made travelling around the city very affordable and we got some great tips from the locals.

Both the Monorail and the LRT run frequently and cost very little. Sometimes the signs to get to platforms are unclear, but the locals are very friendly and will point you in the right direction.

The first time I passed through KL, I stayed in Sunshine Bedz Hostel. For £6 a night we had a 4 bed dorm to ourselves and a free breakfast. They also run a bar crawl each Wednesday, read below for more details…

The following two times Ste & I (and my parents) came to KL, we treated ourselves to a pretty luxurious Airbnb in the newly built, centrally located Platinum Suites. The apartments were lovely, but the rooftop pool and gym on the 51st floor that looked out over the Petronas Towers was breathtaking. The apartments ranged from £10 – £16 a night, depending on how many people were staying. I luckily had some Airbnb credit which brought the price down. It was only a five minute walk to the nearest public transport links, supermarket and within walking distance to the Petronas Towers. If you fancy a taste of luxury, I really recommend staying there!

There are so many things to do in the city. I covered quite a lot, but I’d like to return and do more. Here’s what I got up to:

This museum provides a fascinating insight into Islamic art, architecture, textiles and calligraphy from all over the world, including India, China, Indonesia and Malaysia. There is also a regularly changing exhibition space. I spent an hour and half there, but I could have spent longer. Entrance is only £2.50/RM14 (cheaper if you have a student card), and there is a cafe serving delicious looking food and drinks. The museum is next to the botanical gardens, which could make a good combined trip.

This temple is tucked away in Chinatown and is the oldest Taoist temple in KL, built in 1864. Entry is free and the workers don’t seem to mind tourists visiting and taking photos but do be respectful – people come here to pray and most likely don’t want to be photographed. When I visited, a couple of people explained the rituals and different gods they prayed to, which was really interesting. This is one of my favourite temples because of its colours, smells, decorations and history. Don’t miss it! 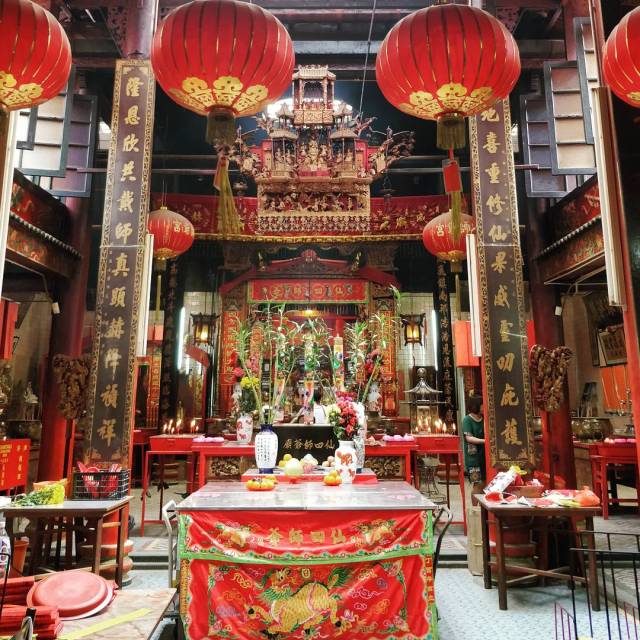 Another old temple! This one is the oldest Hindu temple in KL, built in 1873. Entrance is free, but shoes need to be left outside which costs 20 cents. The South Indian architecture is stunning, and the depictions of Hindu gods and goddesses are beautiful. Staff are very friendly, and are happy to answer any questions about the temple or Hinduism.

Merdeka Square, otherwise known as Independence Square, is where the Malaysian flag was raised on a 100 metre high flagpole in 1957, to celebrate the end of colonial British rule and the start of Malaysian independence. The large square is surrounded by historical buildings and a couple of museums. The central market and Chinatown is only a 10 minute walk away. I’d recommend the free heritage walking tour to find out more about the history – see below.

The Klang River runs through the city, very close to Merdeka Square. Recently, as part of the River of Life project, the KL government have cleaned 110 km of river water so it’s not as polluted. The riverside near Merdeka Square and the Jamek Mosque has been regenerated, making it nice to walk along. I didn’t go inside the Jamek Mosque, but I’ve heard it’s a beautiful place to visit.

The KL tourism office offers a variety of free walking tours every day of the week. Their office is based on Merdeka Square, at the Kuala Lumpur City Gallery, which is worth a visit (bear in mind that if you do a tour, you can access the gallery for free afterwards, saving you a few quid). Only one tour seems to be listed on the official website, but if you go to the City Gallery, they’ll have more up to date information.

I did the 2 1/2 hour Heritage Walk, starting at 9am before it got too hot. The tour covered 11/12 historical sites around Merdeka Square. Our guide was very knowledgeable and I learnt a lot about Malaysia’s history, development and way of life. Although it’s not really promoted or advertised, I’d really recommend this tour to understand Malaysia’s history and to find out more about the historical buildings in the square.

Located on a corner of Merdeka Square in a beautiful old building, this museum has really interesting displays about the process and technology of Malaysian textiles, costumes and traditional dress and accessories. There is a great cafe called The Canteen by Chef Adu tucked away in the back that serves drinks, good, very reasonably priced food and smoked banana brownies (sounds odd but they were delicious!). Entrance to the museum is free.

The 451 metre high twin towers are one of Kuala Lumpur’s iconic landmarks. I didn’t fancy paying the 40 dollars to go up the towers, but I visited the base of them, the shopping mall underneath and the KLCC Park (and I obviously saw them from my Airbnb rooftop pool – yes I’m bragging!). The park behind the towers is great to walk around, escape the traffic for a while and get good views of the enormous towers. Grab a salad/sandwich from the mall and enjoys the views over lunch.

Visiting this neighbourhood is like stepping back in time – there are no sky scrapers, malls or fancy buildings here. Instead, the streets are lined with traditional Malay houses, chickens and dogs running around, street food vendors and small cafes. It feels very bizarre walking through a ‘village’ with huge, modern buildings in the background. The area apparently holds a lot of value (US$1.4 billion), but the village elders refuse to sell the land for development because they want to preserve their traditional lifestyle. I’m not sure how long this will last out, so visit whilst it’s still here! There’s great street food in the evenings on the streets of Raja Alang and Jalan Muda Musa – you’ll certainly smell the durian (Malaysia’s pungent fruit) from a mile off!

Just south of the centre, you’ll find Brickfields – an area packed full of Indian food, clothing and temples. We ate at a fantastic Indian restaurant called Annalakshmi. For £5 each, we got a fully vegetarian, unlimited buffet. I was in heaven. The food wasn’t too oily and the flavours were delicious. I think it was the best Indian food I’ve ever had! They have buffets every day at lunchtime and on weekends.

The first time I went to KL, I happened to be staying at Sunshine Bedz Hostel on a Wednesday and they were advertising a bar crawl where ladies drink for free. After being persuaded it wasn’t a scam, I headed out with some friends and went to several bars around the Bukit Bintang area and I drank for free all night! The alcohol wasn’t a great quality but I drank far to much of it, resulting in the world’s worst hangover. Luckily spicy Malaysian curries and fruit smoothies are good hangover cures! Apparently numerous bars across the city offer ladies free drinks on different nights of the week, so it’s possible to drink for free any day of the week!

There’s loads of street art around the city, especially around the Chinatown area. Some of the pieces are political, some are just pretty – either way they’re great to look at.

Because we had a good kitchen in our apartment, we ate breakfasts and most dinners in the apartment to save money. We bought cheap veggies and fruits from markets and other supplies from the excellent supermarket in the basement of Sunway Putra Shopping Mall. The few places we ate out are listed below, but there were so many veggie restaurants we didn’t get to try in KL.

KL is such a great city that everyone can enjoy. For some reason, flight stopovers/changes are made cheaper by stopping in KL, which makes for a great opportunity to explore the city for a few days. Enjoy!

Follow my adventures around the globe to discover how you can travel on a budget but still have amazing, unique experiences whilst supporting local communities and the the environment.