Singapore was a huge contrast to Indonesia and it was obvious even from the airport. Everything is very clean, it feels a lot more orderly than the hectic Indonesian cities and there are hardly any mopeds! It is also safe to drink the tap water and there are public drinking fountains everywhere.

Getting from the airport to the centre was very easy on the train and our hostel was only a 15 minute walk from Outram Park Station.

We stayed at Happy Snail Hostel, a small, cosy place that had unlimited toast, peanut butter (yay!) and Nutella, as well as discounted tickets to some of Singapore’s main attractions. The dorms were very small compared to others we’d stayed in, but the beds were comfy, and the lockers were big. For £9 a night in Singapore, I couldn’t complain, especially with the free PB!

Travelling around the city was enjoyable and very affordable. The trains and buses were (a bit too) air conditioned and ran on time. I really enjoyed travelling by bus, even though it took a little longer, because it was a great way to see the different areas of Singapore.

We spent four full days in Singapore and I feel that was a good amount of time to explore the city. Obviously, I could have stayed longer because it is amazing, but I know I’ll be back in the future. Here’s what we got up to:

After a copious amount of toast and peanut butter, we followed a self-guided walking route that was in my Lonely Planet guidebook, beginning at Marina Bay station. We walked past the enormous Marina Bay Sands Hotel, the striking Art Science Museum and waterfront, through the vast skyscrapers of the banking district and into China Town where we stopped for lunch. I stumbled upon SaladStop!, and had a delicious, fresh salad which was refreshing in the sweaty, Singapore heat. I even discovered some public toilets on the 5th floor of a building that had an amazing view.

In the afternoon, we walked to Fort Canning Park which is set on a 60 metre high hill overlooking the city centre. Sir Stamford Raffles built his residence there in the early 1800’s but the park was renamed Fort Canning in 1861 when a fort was built on the site. There are loads of interesting, well written historical information boards around the park, as well as a spice garden and an archaeological exhibition.

I’d found a festival listed online called the River Festival, which was being held at various Quays over the weekend we were there. We decided to check it out and saw some energetic Dragon Boat racing in the evening at Boat Quay. Unfortunately, it had been raining heavily and the races started late which seemed to deter a lot of people. After the races we walked five minutes to Clarke Quay, were we saw talented street performers and an incredible drone LED kite display, where 20 or so kites were dancing above the water and into the sky.

Singapore seems to have a lot of free events and festivals throughout the year, so it’s worth checking out what’s on when you go. I used Time Out to find the festival.

After another breakfast of toast, PB & bananas, we took the train to Haw Pa Villas to see the weird and wonderful gardens that one of the Tiger Balm brothers built for the other in 1939. The gardens were designed for the community to enjoy for free (they’re still free), and the obscure statues depict ancient Chinese mythology, history and folklore. Perfect for a quirky morning stroll. 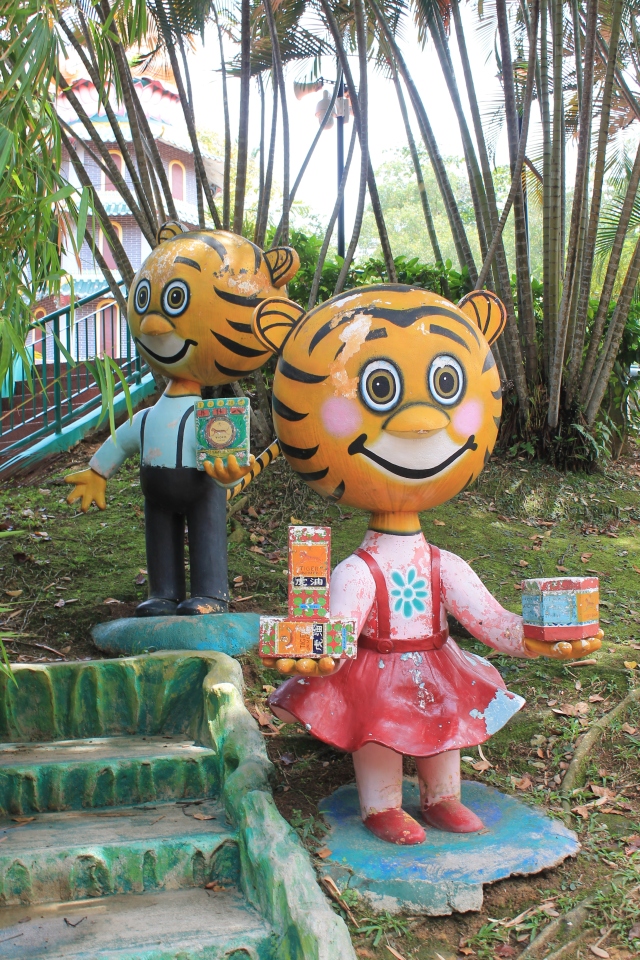 After having our minds boggled, we hopped on another train to the Botanical Gardens. The gardens are massive and contain lots of little areas, such as medicinal plants, an eco-garden and a floral garden. They’re free to visit and it’s a nice place to cool off in the midday heat. There are also huge, resident monitor lizards roaming the grounds – they’re not dangerous and like to be away from people so, if you hear a rustle in the bushes don’t be alarmed!

The Botanical Gardens are pretty close to Little India, so we took the train there after relaxing in the gardens and explored. The streets were filled with colour, lights, spicy smells and fresh fruits and vegetables. We found a delicious, cheap vegetarian restaurant called Ananda Bhavan and had a huge thali for dinner.

Ste and I got discounted tickets from our hostel to visit Gardens by the Bay, so we set off early before it got too hot and busy. The gardens are huge – about 250 acres – and the majority of it is free to visit. They were created in 2012 to boost Singapore’s greenery, biodiversity and quality of health.

To get an aerial view of the gardens and Marina Bay, we walked along the Skyway in Supertree Grove – a 22 metre high walkway between abstract, metal trees covered in climbing plants. It felt like we were floating over the gardens! I recommend getting there early – we were on the Skyway about 10.30am and it was basically empty.

We spent about six hours exploring the gardens and the domes and I honestly think we could have spent more time there! If you’re interested in plants, sustainability, eco-systems and biodiversity (or even if you’re not!) it’s a great place to visit.

We paid around £17 each to go inside the two domes and walk along the Skyway, which I would really recommend doing as it’s such a unique, interesting experience.

After the gardens, we stopped to grab a cheap salad from The Shoppes – a shopping mall under the Marina Bay Sands Hotel on the way back to the hostel, and got offered free cinema tickets to ‘Thor: Ragnarok’ in the Mastercard theatre. The Singaporean didn’t have time to watch it and gave his two tickets to us! We had five minutes to get into our seats before it started but we made it. Thank you to the generous man who made our afternoon! It just shows that smiling and chatting to strangers can bring the most rewarding things.

In the evening, we watched the Marina Bay light and water show at 8pm and the Gardens by the Bay light show at 8.45pm and both were amazing. The Gardens by the Bay show was Christmas themed, which felt a little strange in 30 degree heat! The illuminated gardens were beautiful and they stay open until 2am so there’s plenty of time to wander around.

After the light shows, we headed up to the Marina Bay Sands Hotel sky bar (it’s casual dress on Sundays) and had the famous Singapore Sling cocktail looking over the city. What a way to end the day.

Again, Ste & I got discounted tickets from our hostel, this time to reveal our inner child at Universal Studios! We had fun-filled day running around the theme park, getting on all the rides and wondering through the different themed areas. There are only three/four ‘thrill rides’ and surprisingly they never seemed to have a long queue (maximum 10 minutes). The rest of the rides were great too, it’s amazing how much work goes into making the ride experience so immersive.

The park is relatively small in comparison to others, so we had time to go on every ride at least once and go to all the worthwhile shows and extra experiences (don’t miss the Steven Spielberg one!). Going on a weekday obviously helped too. 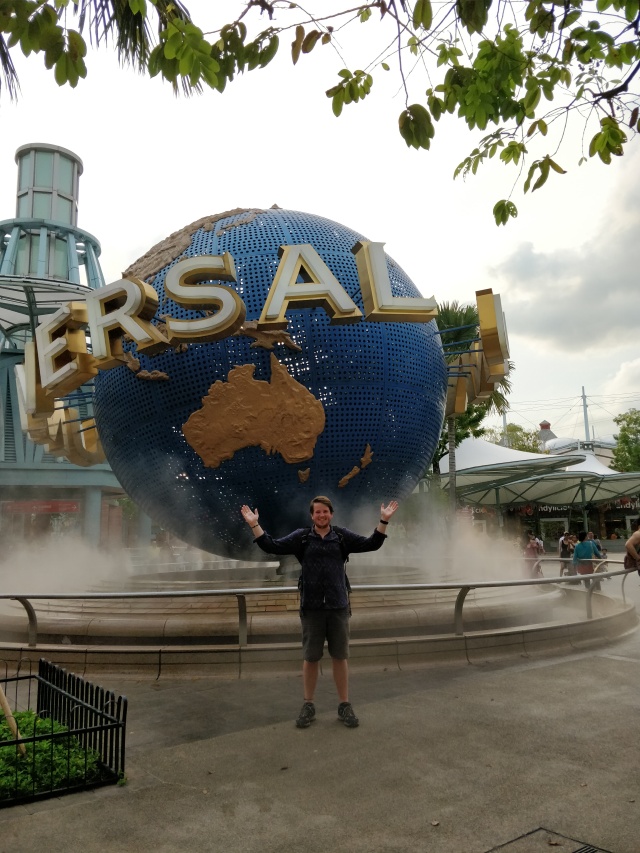 We worked up an appetite running around for literally eight hours, so we headed back to the vegetarian restaurant in Little India for dinner. We were recommended a dosa and a garlic naan set which were both divine.

The next morning, we dosed up for the last time on toast & PB (I was starting to have enough peanut butter by this point!!) and caught a bus from outside our hostel to Johor Bahru, a city on the Malaysian side of the border. The bus cost about £1.50, took about an hour, and dropped us off at both the Singaporean and Malaysian immigration points – a very easy border crossing! From the Malaysian side, we walked into Johor Bahru to collect our hire car to drive to Kuala Lumpur. There is an option to stay on the bus, or to change busses to reach other destinations in Malaysia.

Have you been to Singapore? Would you recommend anything else to do? Please let me know in the comments 🙂

Follow my adventures around the globe to discover how you can travel on a budget but still have amazing, unique experiences whilst supporting local communities and the the environment.